After its establishment, the Drexler Institute developed artificial Valkyries and Arcanas. Minori Amanohara was one of the few products of that research who was born at the Japan Branch of the Institute. She is a “Hybride”, a special Valkyrie who can dual-wield the powers of the Arcana and the Geist. She escaped the facility with the help of Petra.

New Arcanas “Parace L’Sia” and “Ichor”, the Arcana of Blood

An “Alchemist” and a Doctor of the Celestial World. Made several appearances in previous titles of the series as either a Secret Boss or a Final Boss, and possesses unworldly strength. The Arcana of Blood symbolizing the essence of life. The Mobius strip represents the reincarnation of all life. Enhances all potentials to their maximum strength.

The “Story”, “After-Story”, “Survival Score Attack”, “Trial”, Time Attack”, “Versus”, “Training” and “Replay Theatre” modes will be all available! And not missing, “ONLINE NETWORK PLAY” as well!! 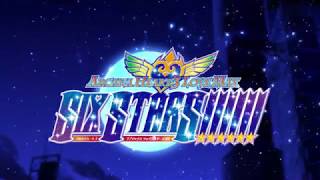 News
Arcana Hearts 3: LOVEMAX SIXSTARS!!!!!! is Out Now on Steam!