BlazBlue: Chrono Phantasma brings the very best in 2D fighting to a new level on the PlayStation®3! Featuring new characters, redesigned moves, and an incredible networking mode to play against fighters around the world, Chrono Phantasma has everything you need to satisfy your BlazBlue addiction! For those unfamiliar with the series, BlazBlue: Chrono Phantasma provides an extensive tutorial and special beginner’s mode (“Stylish Mode”) to get everyone in on the action.

New Characters – A variety of new characters join the fight, such as the elegant Amane Nishiki and the formidable Bullet.

Characters Re-imagined – Each character in the game has been re-imagined with new moves and artwork. Relearn your favorite characters or pick new ones to play!

Enhanced Networking Mode – Play with people from around the world! The networking mode includes a ranking system so players can determine how experienced their opponent is! 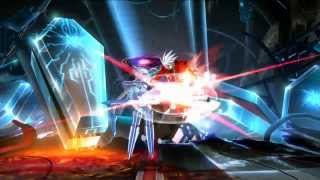