BlazBlue: Continuum Shift II contains the complete set of single player features from the console version, such as Arcade, Score Attack, Training, and Story mode, as well as an ad-hoc Network mode for multiplayer play. This impressive list of features is topped off with new content created solely for the handheld version, including extra story material and brand new modes such as Legion 1.5 and Abyss Mode. 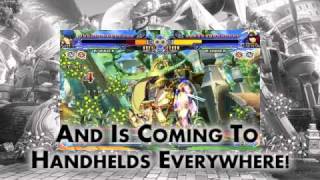