BlazBlue: Continuum Shift inherits all the key features of its predecessor while adding a few twists of its own. Tsubaki, μ-12 and Hazama will join the ranks of the veterans, who will be reborn with additional moves added to their arsenals. With new modes like Beginner Mode and Tutorial Mode, even fighting game beginners can pull off combos like the pros and dive right into the action.

Beginner Mode encourages a wider audience with an easier control scheme; anyone can jump right in and play! Tutorial Mode allows novices and pros to practice everything from the basic mechanics unique to BlazBlue to the most complicated and powerful combos. Challenge Mode offers advanced players a chance to complete character-specific combo goals and missions.

Take over Kagutsuchi by creating your own army in Legion Mode!

Defeat the enemy armies positioned at various locations on the map. The ultimate goal is to fill the entire map with your color by defeating all the enemy hubs. Recruit enemy soldiers by defeating them!

Welcome Hazama the mysterious mastermind, Tsubaki the valiant female knight, and μ-12 to the world of BlazBlue!
Three-dimensional effects and 2D visuals integrate seamlessly on every every one of four completely new stages, accompanied by seven banging new songs written by famed composer Diasuke Ishiwatari specifically for Continuum Shift!

Players can battle others from around the world via the PlayStation Network. Players can not only search for matches, play games, and observe matches online, they can also chat with friends while playing. 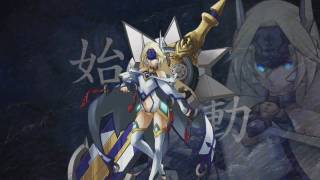