“Chaotics” has become the sole source of energy in the entire world but the inventor of Chaotics, Dr. Tesla has suddenly disappeared and left the mysterious words, “CHAOS CODE” behind. The United Earth government has tried desperately to cover up both the scientist’s disappearance and his cryptic message, but the information had already gone viral.

The United Earth Government, left with little choice has offered a bounty to anyone who could solve the mystery behind the doctor’s mysterious words.

What exactly is “CHAOS CODE”…? Individuals from around the world take up the challenge, each with their own agendas. Some seek to control the power of Chaotics, there are those who seek to wrest control from the government, and others still are in it for simple financial gain. Thus begins the fight for the “CHAOS CODE”!

Newcomers Lupinus and Ray join the chaos. Also, each of the 16 unique characters have 4 additional moves from the original that players can choose from to suit their play style.

Use the “Color Edit” Mode, to customize the color scheme of your character for greater personality!

Play online with the best fighters from around the world and battle and become the compete for the highest rank! 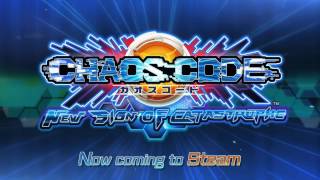