The war between humans and RAGE was exceedingly fierce, but thanks to the counter-RAGE organization Freyja and a certain GEAR mercenary, they steadily began recovering key locations on the surface. In 2112, over 50 years after the war began, humanity reclaimed Japan from the RAGE.

30 years later, a beacon of light and hope, the Cosmopolis was built upon Osaka. A pilot with an inherited GEAR and huge debt sets out with his Operator to become a Ranker in the Arena. It will not be a story for the history books, but simply a battle for their freedom…

ARENA MODE
Fight action packed battles against other mechs to win both money and Arena Points. Obtaining Arena Points increases your rank, opening up more opportunity. The fights can range between intense 1v1 clashes to having a variety of special conditions to win.

MISSION MODE
Explore the Cosmopolis dungeon, a sprawling area that changes every time you enter, to collect parts and other items for your GEAR. Raise your rank in the Arena to unlock more difficult dungeons, and complete special sub missions to unlock bonus rewards.

GEAR CUSTOMIZATION
Make changes to and customize your GEAR, in an unprecedented amount of ways! GEARs have 8 components to upgrade: head, body, arms, legs, shoulders, right weapon, left weapon, and back weapon. With over 1000 parts, 80 unique traits to choose from, and custom paint jobs, your GEAR will become truly yours.

PILOT UPGRADES
A first for the series, level up and customize your GEAR pilot as well, choosing from five different stats to build up.

EXPANSIVE CAST OF CHARACTERS
Over 40 unique characters to interact with as the story progresses.

PROCEDURAL ARENAS
Never fight on the same map twice! New routes, treasures, and enemies await you each time you take on a mission. 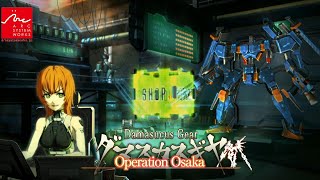