Once upon a time, in an unnamed Hierarchical City, was Ragna and Dead Spike-san. Ragna, as hard as he fought, never seemed to win…

Dead Spike-san, witnessing defeat after defeat, had a bright idea. If he ate more, maybe he could become stronger…?

Dead Spike-san and Ragna set off on an epic(?) journey.

Groove to a total of 20 musical tracks from the BlazBlue series!

Simple to Learn, Tough to Master! Using just the L and R buttons, gobble up as much as you can and aim for a high score. 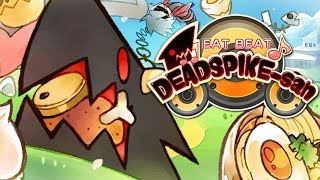