The world was once at peace. Lush and vibrant, all forms of life lived in harmony.

Mankind lived at one with nature. They settled in the forest, raised families, and passed knowledge to the next generation. They did not live the most prosperous lives, but their survival was a testament to mankind’s willpower, and they enjoyed the blessings of the forest.

Until the Decoders came.

They appeared without warning the day the sky broke open with a blinding light. Some looked like the children of man and beast. Others, like the rocks themselves came to life. With their claws, fangs, and mysterious powers, they slaughtered the innocent. Razing forests and entire villages, the Decoders seized control of the world in a single night. Violence and fear reigned. Those who managed to survive the rampage escaped and lived in fear of discovery.

Brave heroes make their last stand against the Decoders to return peace to the world. FANTASY HERO ~unsigned legacy~ is here to scratch your action RPG itch!

RPG GREATNESS ON THE GO: Use the Nintendo Switch’s unique handheld mode to take your heroes on the move and defeat evil anywhere.

CHOOSE YOUR HERO: Select from one of four heroes to save the world, each featuring a different playstyle: slashing, wrestling, shooting, or punching with giant robot fists!

CUSTOMIZE YOUR HERO: Utilize the skill tree system to train your character to further suit your own playstyle. 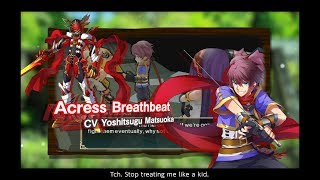