Players will guide the clumsy robot Tsuruhashi as he struggles to stay awake to defeat the enemies lurking around every corner, and search for rare matter slumbering deep underground in this strategic roguelike game like no other!

Set guidance pins at your destination to lead Tsuruhashi down the right path. Use pit stops along the way to their fullest, with an arsenal of strategic options available. Find the best way to dig your path! The stages change each time you play them, and the difficulty steadily climbs as your skills improve, making for great replayability!

Wield Cheer Energy to its Fullest!

Connecting the cables along the tunnels you dig creates an energy source to power-up Tsuruhashi! Maximize your digging efficiency by providing power, with bonuses such as increasing Tsuruhashi’s digging speed or attack damage. When you face off against powerful bosses, the energy you charge up can help turn the tides in your favor with a special attack.

Uncover the Mystery of Rare Matter Through an Engaging Story!

The story unfolds between stages through dialogue and special event illustrations.

About the Story
The story takes place on a planet in a distant solar system struggling with depleting energy sources. Their savior arrives in the form of a tool known as “Tsuruhashi.” After resolving the issue by unearthing “rare matter” from deep underground, Tsuruhashi vanishes. Without their savior around, people create “mining frames” to explore the underground. The teams who use mining frames to excavate the underground are known as Ground Divers. Take your role as a member of one such team, Studio Tsuruhashi, and pilot the mining frame “Tsuruhashi,” which operates using energy from “Cheer Crystals.” These mysterious crystals convert support into a power source for the mining frame. Your journey begins as you dig deep down beneath the ground to uncover the secret of these crystals and find rare matter.

Brought to You by a Star-studded Team!

With a theme song by the anime music legend Hironobu Kageyama, the design of Tsuruhashi and character design supervision by the accomplished mecha designer Shigeto Koyama, and character designs by manga artist Kakeru Kakemaru, the game boasts a team of incredible creators. Experience the game world brought to life! 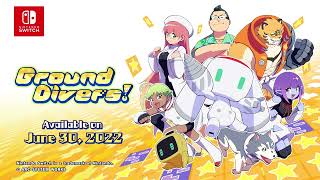