Started off as an indie development, the final episode of the hit series, “MELTY BLOOD Actress Again Current Code” is now on Steam! Enjoy a large character variety, maximum combat freedom, and a deep dive into the lore within different game modes.

All playable characters come with 3 separate styles for players to choose from – “Crescent Moon Style”, “Full Moon Style” and “Half Moon Style”. Each style exhibits a different behavior for the selected character; experiment away to discover your own combat style!

Largest Character Variety in the Series

Today a friend, tomorrow a foe… Some tag-teamed, some got converted to the vampiric side, some just wanted to have a spot in the promised movie debut. Try your hand at the largest cast number among the series with all 31 characters (multiplied by 3 styles each!) to find the dream fighter that suits you best!

A year has passed after the TATARI incident left Misaki Town scarred. However, the nightmare revisits again for the third time. Every character has a story to tell in “ARCADE”. Also, users may enjoy pure battle action in “VERSUS”, whether it is 1P vs 2P, 1P vs CPU, or just watch CPU vs CPU. 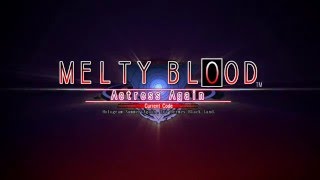